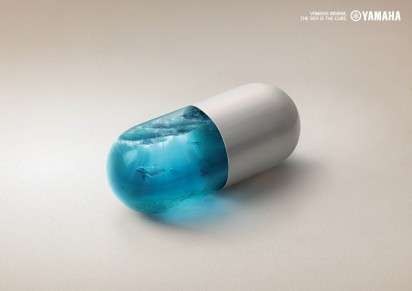 The Yamaha Marine 2013 Campaign Shows 'The Sea is the Cure'

Meghan Young — March 5, 2013 — Marketing
References: dlvbbdo & ibelieveinadv
Share on Facebook Share on Twitter Share on LinkedIn Share on Pinterest
There is a pill for everything, but as the Yamaha Marine 2013 campaign shows people, sometimes the best medicine for an ailment can be found in the great outdoors. In this case, that involves the vast ocean and all it has to offer. This is cleverly illustrated through the use of common medication forms including pills and droppers. But instead of being filled with manmade concoctions, they are filled with serene sea life.

The Yamaha Marine 2013 campaign was conceived and executed by DLV BBDO, an ad agency based in Milan, Italy. It reads, "Yamaha Marine. The sea is the cure." Art directed by Davide Fiori with creative direction by Davide Fiori, Valentina Amenta, the images were shot by photographer and post producer LSD. Clean and simple, it gets the message across loud and clear.
1.3
Score
Popularity
Activity
Freshness
View Innovation Webinars