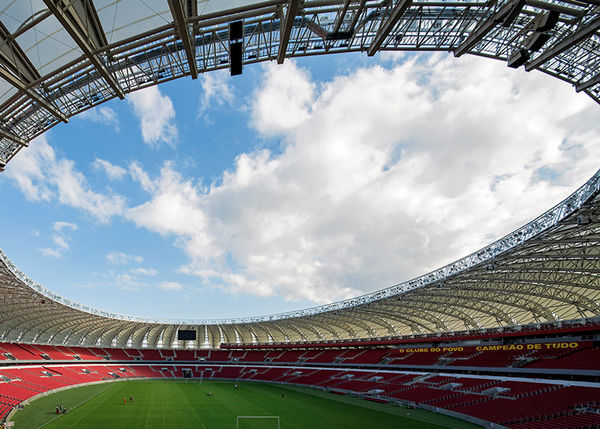 Vasiliki Marapas — June 13, 2014 — Lifestyle
References: leonardofinotti & dezeen
Share on Facebook Share on Twitter Share on LinkedIn Share on Pinterest
Brazilian photographer Leonardo Finotti focuses his lens on the World Cup stadiums that will be used in the 2014 games. The series explores not only the architectural impact, but also the social impact, caused by the 12 different venues being constructed or renovated especially for the international tournament.

The stadiums are a topic of controversy in Brazil, where citizens protested against the use of public funds being poured into the venues, as opposed to being used for city infrastructure and public transit. However, the city's passionate relationship with soccer cannot be discounted in this debate.

Finotti's series reflects his own doubts about whether the World Cup will do much to improve the nation's spirit. He explains, "People in Brazil, me included, are divided between the passion for football and the climate generated by the inefficiency, the more than probable corruption and the arguable decisions related to infrastructure, in a developing country full of contradiction."
2.4
Score
Popularity
Activity
Freshness
Get Trend Hunter Dashboard