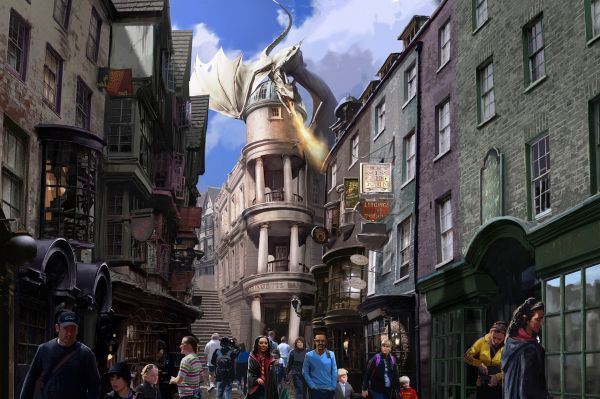 Meghan Young — January 24, 2014 — Art & Design
References: universalorlando & refinery29
Share on Facebook Share on Twitter Share on LinkedIn Share on Pinterest
In 2010, fans of J.K. Rowling's internationally celebrated series was turned into a theme park; three years later a Wizarding World of Harry Potter expansion is underway. It will incorporate the town of Hogsmeade and Diagon Alley, which, in addition to Hogwarts itself, are perhap two of the most exciting places depicted in the books.

What makes the Wizarding World of Harry Potter expansion especially exciting is the fact that people will first experience a muggle London before entering Diagon Alley, which will hopefully involve magic bricks. From there, visitors will be able to head to Ollivanders, Gringotts bank (which includes an exciting roller coaster ride to inspect their security measures) and Weasley's Wizard Wheezes among other treasures. Perhaps the cream of the crop is a full scale representation of The Hogwarts Express.
1.5
Score
Popularity
Activity
Freshness
View Innovation Webinars