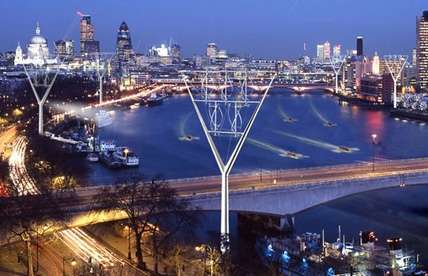 Hjortur — April 13, 2007 — Eco
References: marksbarfield & yankodesign
London Eye architect Marks Barfield has suggested to Ken Livingstone, the mayor in London, that half of the city's renewable energy goals will be met by installing thousands of wind turbines. Barfield and a team of specialists including engineers and environmental consultants has calculated that by installing 40 m high, Y-shaped structures every 24 hectares, placing 600 along the river Thames, 1800 around the M25 and 4170 along 580 km of main roads in the capital, half of the mayor's aim to generate 665 GWh a year from renewable sources can be met.

So instead of the black smoke coughing chimneys on every roof that have symbolized the old London we might see 40 meter (120 feet) high Y-shaped windmills rising above the city's rooftops and becoming the landmark of London.
3.5
Score
Popularity
Activity
Freshness