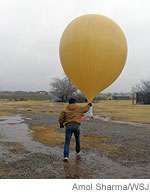 "Space Data Corp, already launches 10 balloons a day across the Southern U.S., providing specialized telecom services to truckers and oil companies," the WSJ says. "The balloons soar 20 miles into the stratosphere, each carrying a shoebox-size payload of electronics that acts like a mini cellphone 'tower' covering thousands of square miles below.

"His idea has caught the eye of Google Inc., according to people familiar with the matter. The Internet giant -- which is now pushing into wireless services -- has considered contracting with Space Data or even buying the firm."

You know what's fun about this? Imagine millions of balloons hovering over the earth, blasting so much naughty content and Facebook photos, that we will literally be welcoming the aliens with social networked garbage. Post that on your wall!