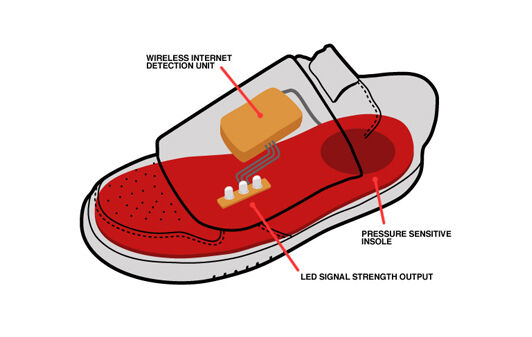 A Step in the Right Direction

Bianca — April 30, 2008 — Fashion
References: mstrpln & behance.net
Share on Facebook Share on Twitter Share on LinkedIn Share on Pinterest
I thought the Wi-Fi Detector T-shirt we featured was truly awesome, albeit so geeky, no one with a hint of fashion savvy would dare wear the digital display. These sneakers, on the other hand, aren't as flashy, but still work as fully functional hot spot finders.

As you wander around town, an integrated display will inform you on the signal strength of hot spots around you. The wearable Wi-Fi, known as A Step in the Right Direction, was designed by mstrpln in collaboration with Ubiq boutique.

"The ASRD sneaker is equipped with an integrated wireless internet detection unit embedded under the flap of the left shoe," ASRD says. "Once the pressure sensitive insole is activated, the unit scans the surrounding area for Wi-Fi signals and displays the result through LEDs.

"The three LEDs on the flap enclosure represent the signal strength of any wireless internet signals within a 50 meter area. A blinking LED represents no signal, while a solid LED shows that there is a signal present."

If wearing hot spot finder fashion is just too much for you, regardless of where it's worn, you can still be a sneaky geek with the use of the Wi-Fi finder pen!