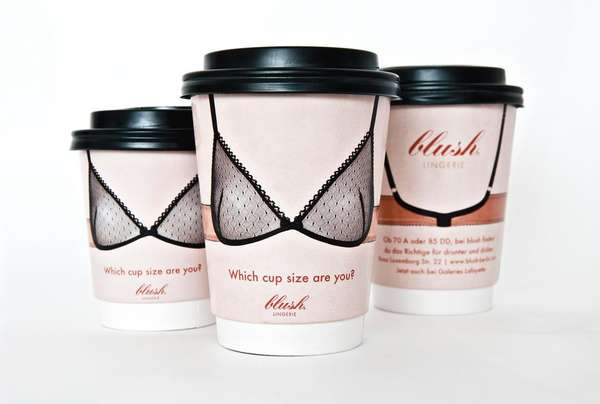 The 'Which Cup Size Are You?' Campaign Covertly Puts Bras on Women

Jason Soy — August 29, 2012 — Marketing
References: adsoftheworld & thisisnthappiness
Share on Facebook Share on Twitter Share on LinkedIn Share on Pinterest
There are few ads in existence as witty, interactive and memorable as this 'Which Cup Size Are You?' campaign for Blush Lingerie. Cooked up by the minds of glow berlin, a German advertising agency, ‘Which Cup Size Are You?’ plays off the double meaning of “cup” to openly ask women about the size of their breasts under the guise of coffee orders. Images of bras from Blush Lingerie also adorn coffee cups to further illuminate the clever concept, but that isn’t where the true genius of this campaign lies.

'Which Cup Size Are You?' really begins to embed itself in the consciousness of viewers through two accompanying print ads, featuring the aforementioned cups placed directly in front of attractive models. The images of the bras overlap the torsos of the beautiful ladies to give the impression they’re in their underwear, treating audiences a modest, yet titillating ad they won’t soon forget.