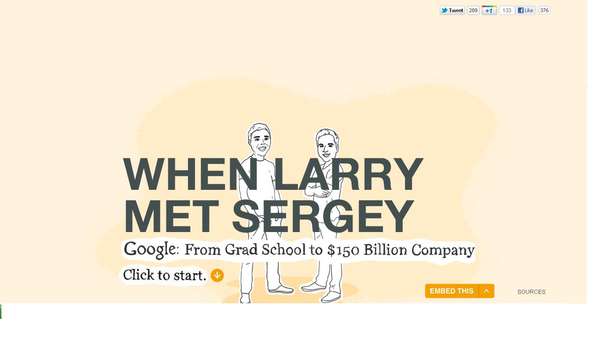 'When Larry Met Sergey' Celebrates the Origins of Google

Josh Mears — January 29, 2012 — Pop Culture
References: google & onlinephd.org
It was 1995 and the most tech-savvy of society were just being introduced to the then-called information highway when Larry met Sergey. The two creators of the world's leading search engine and smartphone maker, Google, which also owns one of the world's largest renewable energy manufacturers. This infographic showcases the duo's meteoric rise from Grad school to a $150 billion dollar company.

When Larry met Sergey is an interactive website that functions chronologically and allows for visitors to scroll through the years of Google. Some interesting facts from the site are that Google was originally intended on being spelled 'Googol,' which is the word for the number one followed by 100 zeros, and that Google's first investment was for $100,000 from Sun Microsystems in 1998.

When Larry met Sergey is comically drawn and gives users a quick run down of how the company was formed.
2.5
Score
Popularity
Activity
Freshness