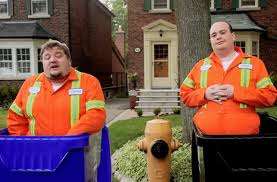 Jordan M — December 27, 2010 — Pop Culture
References: theglobeandmail & youtube
When it comes to municipal waste-management services, usually the last thing that comes to anyone’s mind is comedy. But when the city of Toronto hired two Second-City alumnae (Mike Nahrgang and Marty Adams) to write and star in a public-service infomercial explaining the city’s garbage disposal services, the resulting 'We Want It' campaign (which spoofed trashy Cash for Gold ads) became a viral smash-hit worldwide. It is also huge marketing success for one of the city’s most essential programs.

Essentially, the video boils down to two fictional garbage men named Chuck and Vince grabbing electronics and shouting, “We Want It!” over and over again. However, the impact of the madness behind the message can’t be understated. The We Want It video became an internet sensation overnight and was even featured on CNN.

The We Want It campaign has been such a success, in fact, that what was originally supposed to be a one-off deal has turned into an open-ended contract between the two comedians and the city.
2.4
Score
Popularity
Activity
Freshness