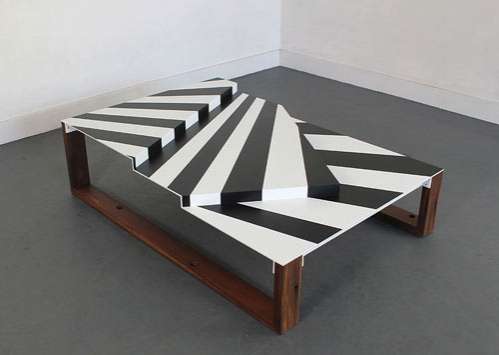 Meghan Young — November 1, 2011 — Eco
References: uhurudesign & design-milk
Share on Facebook Share on Twitter Share on LinkedIn Share on Pinterest
It would be hard to guess that the War Craft Collection was actually made out of reclaimed materials from the deck of a naval ship. Yet that is exactly the case. Specifically, each piece was created using teak from the deck of the decommissioned USS North Carolina.

Designed by Brooklyn-based studio Uhuru, the War Craft Collection is comprised of a coffee table, end tables, divider and rocker, all of which take on a rather art deco appeal more than anything else. Instead of blatantly being inspired by the military, the War Craft Collection reinterprets certain things in order to create pieces that would fit almost any lifestyle. For instance, the Dazzle Coffee Table sports an interpretation of Dazzle camouflage that is used to confuse enemy battleships. Yet, by breaking up the patterns, the table becomes its own entity.
5
Score
Popularity
Activity
Freshness
View Innovation Webinars