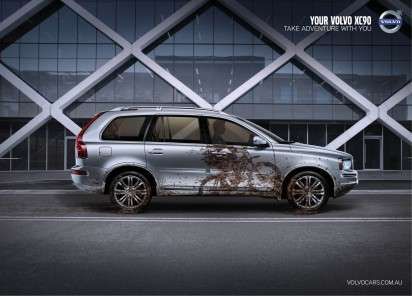 The Volvo XC90 Campaign Urges People to "Take Adventure with You"

Meghan Young — April 5, 2013 — Autos
References: sapient & ibelieveinadv
Share on Facebook Share on Twitter Share on LinkedIn Share on Pinterest
Car campaigns more often than not revolve around super shiny vehicles that look as though they just exited a car wash; not the Volvo XC90 campaign. Dirty with mud, sand and snow, this car has been through the ringer not once but thrice. But instead of the typical grubbiness that comes with everyday driving, this has been brought about by something a lot more fun. As the Volvo XC90 campaign reads, "Take adventure with you."

The Volvo XC90 campaign was conceived and executed by SapientNitro, an ad agency based in Sydney, Australia. It was art directed by Dylan Soopramania with creative direction by Scot Waterhouse. Shot by photographer Danny Eastwood and retouched by Derek Leong, the images will encourage others to go on an adventure.
1.7
Score
Popularity
Activity
Freshness
Get Better and Faster