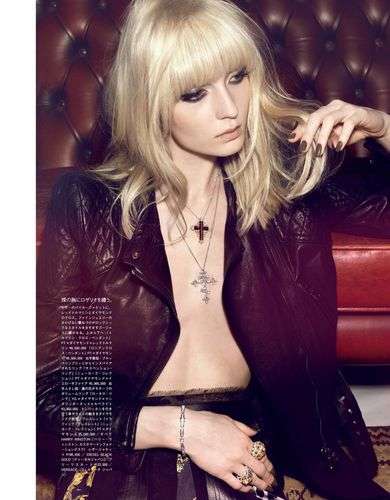 The Vogue Japan She Loves to Rock Editorial is Mellow

Leslie Chen — May 29, 2013 — Pop Culture
References: vogue.co.jp & fashioncopious.typepad
Musicians may have a lot of energy on stage, but the Vogue Japan She Loves to Rock editorial offers a glimpse of an artist's downtime when they're not entertaining thousands of fans.

Photographer Henrique Gendre captures model Alexa Yudina for this rocker-themed shoot appearing in the July 2013 issue of Vogue Japan. Set in a hotel room, Yudina plays with her guitar while dressed in leather jackets, fur shrugs and kimono-inspired robes - or sometimes in nothing at all. Her messy bleach blonde hair finishes off her rocker look.

If you've ever wondered what celebrities do while in their hotels, the Vogue Japan She Loves to Rock photo shoot tells you that it's not trashing their rooms or even ordering copious amounts of room service, but a good amount of thoughtful thinking.
4
Score
Popularity
Activity
Freshness