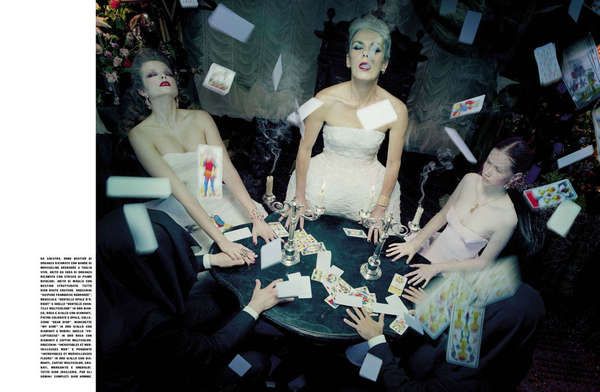 Meghan Young — September 20, 2012 — Fashion
References: vogue.it & latestfashioneditorials
Share on Facebook Share on Twitter Share on LinkedIn Share on Pinterest
The Vogue Italia ‘So Magical, So Mysterious’ editorial is a haunting photoshoot that may or may not inspire a person to conduct their own seance. Of course, this seance is done in style. Full of dark opulence, the images will at the very least influence a fashionista’s upcoming Halloween party.

Shot by London-based British photographer Miles Aldridge, the Vogue Italia ‘So Magical, So Mysterious’ editorial appears in the September 2012 issue of the magazine. It stars model Eniko Mihalik along with group of fine-looking folk cast as her regal family. They awaken spirits in outfits put together by stylist Alice Gentilucci. From baroque-inspired contemporary gowns to floor-skimming veils and bejeweled accessories, the looks are strikingly dramatic, which suits the theme perfectly. It blends old with new seamlessly.