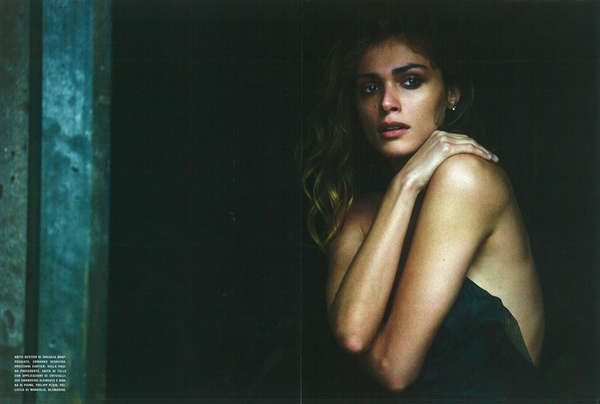 Meghan Young — August 31, 2012 — Fashion
References: vogue.it & fashiongonerogue
Share on Facebook Share on Twitter Share on LinkedIn Share on Pinterest
At once seductive and solitary, model Elisa Sednaoui is a creature of contradictions in the Vogue Italia September 2012 editorial. Although she could very well be waiting for someone, the dark images suggest otherwise. Romantically cinematic, there is nothing lonely about her presence. Instead, she simply looks bored. As least she is sexy at the same time.

The Vogue Italia September 2012 editorial was shot by Paris-, New York-, and Arles-based photographer Peter Lindbergh. The Italian beauty was styled by fashion editor Sara Maino. Pulling pieces from the racks of such designers as Gucci, Celine, Burberry Prorsum and Christopher Kane, the looks are full of embellished mystery. From shaggy furs to bejeweled dresses, there is an edgy elegance to her wardrobe that suits the environment perfectly.
6.6
Score
Popularity
Activity
Freshness
Get Better and Faster