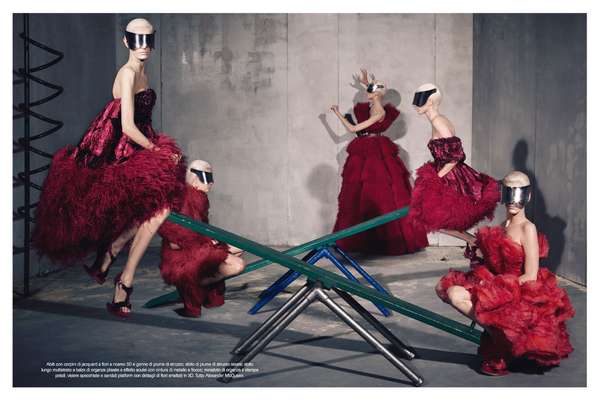 Styled by Karl Templer, the models are shot wearing quirky fall collection pieces from designers such as Louis Vuitton, Lanvin, Givenchy and Rick Owens. Although each photo is distinctively thematic, the concept of identity and repetition are emphasized throughout. The editorial stars a multitude of models including Vanessa Axente, Mackenzie Drazan, Lida Fox and Elena Bartels; however, the meticulous styling and makeup creates the illusion of identically, making it hard to distinguish one model from another.

There is also a repeated theme of props and playgrounds, with everything from seesaws to cowboy lassos being used in an unusual manner. Peculiar and playful, the Vogue Italia July 2012 'Collections' editorial is a chilling childhood-inspired photoshoot.
6.1
Score
Popularity
Activity
Freshness
View Innovation Webinars