Redesigning The Wiimote
Next
Set of
Related
Ideas 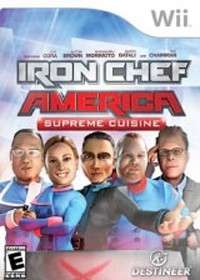 From the leaked cover art, it looks like the usual suspects--Masaharu Morimoto, Mario Batali, Cat Cora, and Alton Brown--are a part of the game, but curiously absent are Iron Chef America mainstay Bobby Flay and newcomer Michael Symon. And Cat Cora is on the cover art, but we haven't seen her Mii image yet.

Only time will tell how popular cooking via a video game controller will be, especially since there's no actual food to taste after the battle. The game is set to hit store shelves in the fall of 2008.
3.3
Score
Popularity
Activity
Freshness
Get the 2021 Trend Report FREE

Wii While You Pee
Gaming in Toilets To Promote DUI Awareness