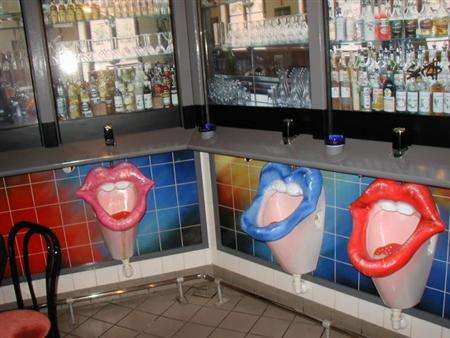 Pee A Little Creative in Vienna

Bianca — August 29, 2007 — Naughty
References: urinal.net & gadling
We've seen the lip toilets before, but what makes this bar unique is that it's actually themed around the urinals. Yes, it is a Toilet Bar.

Across all cultures, people have a tendency to be intrigued by Europe, art, innovation and, for whatever reason, bodily functions. The Toilet-Bar in Vienna combines all of the above. The creative, yet extremely odd, urinals are definitely a site worth seeing, but, like most public bathrooms in Europe, will cost you a service fee. If, on the other hand, you're one of those sickos who fantasizes about urinating in people's mouths, then Austria's Toilet-Bar is just the place to live out your creepishly kinky dreams.

"The Toilet-Bar Vienna is a small public bathroom located in an underpass near the National Opera," Gadling reports. "For the small price of just 75 cents, patrons of the urinal arts can relieve themselves in some of the most decorative urinals ever conceived by man."

"Unfortunately, someone blabbed their mouth off to the opposite gender and local women's rights groups eventually forced the proprietors to remove the sexist objects. The creator of the lip urinals eventually sold them on eBay, so who knows where they might appear next. If you happen to run across them in a bathroom located in some sexist corner of the globe, don't tell anyone!"
5.5
Score
Popularity
Activity
Freshness