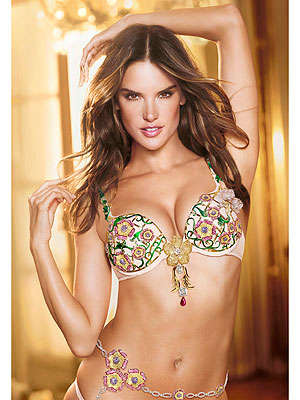 Erin Fox — October 17, 2012 — Fashion
References: victoriassecret & stylenews.peoplestylewatch
The lingerie and clothing brand, known for its extravagant runway shows, reveals Alessandra Ambrosio as the coveted Angel to wear the Victoria's Secret 2012 Million Dollar Bra during this holiday's most known fashion show. Being asked to model the Fantasy Bra is a huge accomplishment and achievement in the modeling industry.

This year the Fantasy Bra is marketed as a gift set including a push-up bra and belt. The $2.5 million set is comprised of amethysts, sapphires, rubies and diamonds. The bra comes with a detachable 20-carat white diamond in the center for when you want to dress the bra down. Between the belt and bra, the set comes equipped with 5,200 precious gem stones. The bra meets the runway in one month at the annual Victoria's Secret Fashion Show.
6.2
Score
Popularity
Activity
Freshness