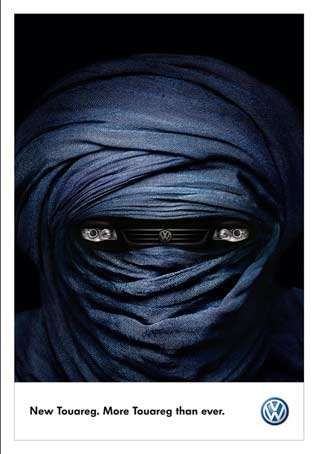 The name "Tuareg" was applied to this nomadic people by European explorers, but in reality the Tuareg refer to themselves with various other names, one of which is "Kel Tagelmust," or "People of the Veil," according to Wikipedia.

The "People of the Veil" reference explains these ads, which feature heavy headpieces revealing open slits through which the front lights of cars are displayed. These print ads are intriguing, and the message goes to the performance of the vehicles in inhospitable terrains such as the Sahara Desert.

In case you're wondering, the Chevrolet Lumina ad, the third in the gallery, came first in 2003. The Nissan 4x4 ad followed in 2005, and the Volkswagen Touareg that leads off the gallery was released in 2007.
2.7
Score
Popularity
Activity
Freshness
Access Advisory Services