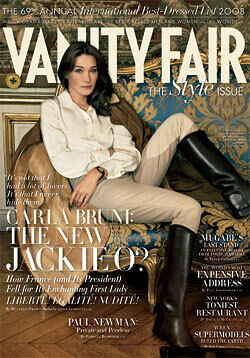 Well known for her love of Chanel and elegant style, the cover asks the question, "Carla Bruni, The New Jackie O?"

The Italian heiress, ex-model, and singer has earned her place in the heart of a French president who is referred to by his people as, â€œle PrÃ©sident Bling-Bling.â€

Even though the French make fun of their president's 'unpresidential' style, they are obsessed with his lifestyle and new wife. Vanity Fair shares that 76 books were written about Sarkozy, Carla, and his ex-wife CÃ©cilia in the first year of his presidency alone. Marrying someone as captivating as Carla only fueled this fascination.

â€œCarla has led many lives,â€ the noted journalist Christine Ockrent tells Vanity Fair. â€œShe's a kind of alpha female. She was never a courtesan like Pamela Harrimanâ€”she was more like a female Don Juan.â€

"She was full of life and wit. She was beyond polite." Karl Lagerfeld says of Carla during her modeling days. "So many, like Linda and Christy, had periods of being moody and difficult. She was always perfect."

Hit the gallery below for five pictures from the new Vanity Fair editorial and five more from Carla's modeling past in 1990s for the likes of Chanel, Versace, and Dior haute couture.
4.5
Score
Popularity
Activity
Freshness
Attend Future Festival