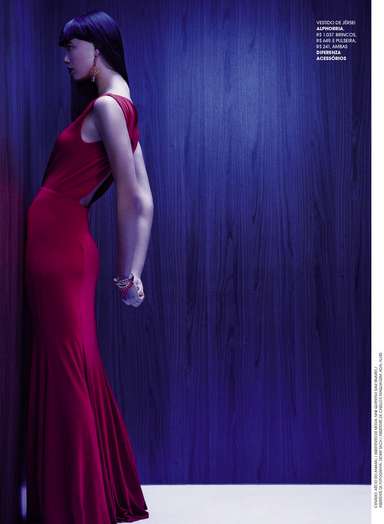 — July 7, 2013 — Fashion
References: busca.globo & photoshootbloger.blogspot
Share on Facebook Share on Twitter Share on LinkedIn Share on Pinterest
The latest editorial from Marie Claire Brazil not only showcases some of the season's best style, but also vampire-esque looks that channel a feeling of the sensual un-dead. The entire editorial has a 'True Blood' feel to it, with a little more elegance and formalwear. Model Paolla Rahmeier is shown dressed in crimson ensembles, from chic blazers to flowing evening gowns.

Perhaps the most stunning capture in this editorial shows Rahmeier wearing a 40s-era bucket had (crimson, of course), with a scarlet scarf knotted around her neck and a red jacket buttoned up as high as possible. The hat covers her eyes, with only her long, black hair trailing from it. She is also wearing red lipstick, which contrasts her pale skin, giving her a vampire vibe.