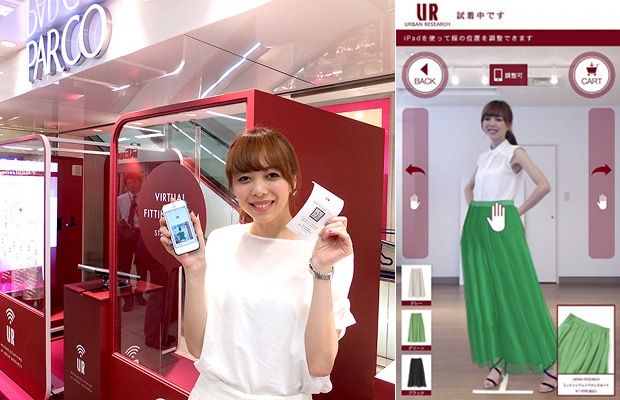 Laura McQuarrie — July 7, 2014 — Tech
References: urban-research & japantrends
Share on Facebook Share on Twitter Share on LinkedIn Share on Pinterest
Wearable Clothing by Urban Research that is like that perfectly happy medium between trying on clothes in real life and trying them on virtually, since the experience gives you a bit of both. The virtual fitting room takes the form of a booth, which can be installed anywhere, provided that there is access to WiFi and electricity—in the future, Wearable Clothing is set to appear in train stations, department stores and airports.

In this dressing room booth, a camera takes an image of a shopper so that they can try on clothes. The camera is responsive to movement and so are the fabrics. It can be time-consuming to fiddle with zippers and buttons when trying on multiple looks, but Wearable Clothing makes fitting rooms as simple as possible.

If a shopper finds an item that they really like, consumers can get a QR code that will direct them to the brand's online store.
6.7
Score
Popularity
Activity
Freshness
Get Better and Faster