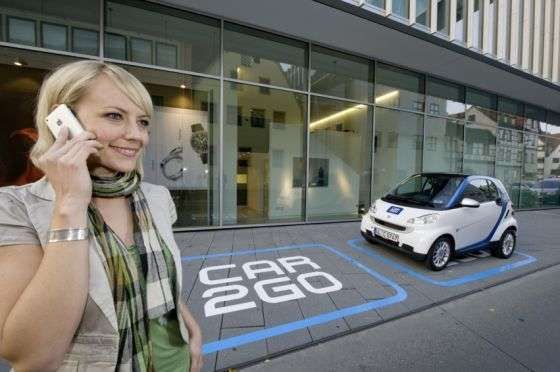 Holger Mohr — October 27, 2008 — Autos
References: tagesanzeiger.ch
Share on Facebook Share on Twitter Share on LinkedIn Share on Pinterest
The trend has gone from coffee to urban car sharing programs like Smart2go. The business model is to let customers drive Smart Cars as much as they want, and pay by way of their mobile phone; each time they drive, they are sent a digital invoice. The Smart2go program has been up and running in Ulm, Germany for two days. The pilot project is the brainchild of Daimler Chrysler, who started the initiative with 1,000 people and 50 Smart cars.

Here's how it works. Smart2go members open the car by way of their driver's licenses which contains a special chip. The car is started with a login code. The Smart2go customer can drive as much as he or she wants, and can then just leave the car at any designated Smart2Go parking space. For one minute you pay 19 Euro cent, for an hour, the fee is 9,90 Euro, and for a day, it is 49,90 Euros.

The Smart2go car sharing concept is based on a 20 year old idea from Swatch founder Nicolas Hayek, who is also the creator of the Smart.