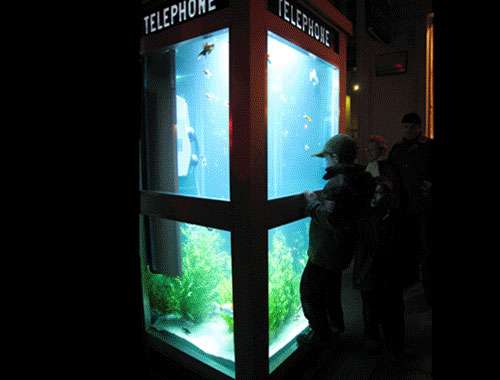 It's fascinating by day, but at night when darkness sets it, the obscurity it adds to the streets is surreal. It illuminates to cast a brilliant blue aura and the live fish swimming inside are a true visual delight.

"With the advent of the mobile telephone, telephone booths lie unused. We rediscover this glass cage transformed into an aquarium, full of exotically coloured fish; an invitation to escape and travel," the designer said.

The Fishtank Phone Booth was created as part of the FÃªte des lumiÃ¨res or Lyon Light Festival which is an annual celebration to honour Mary, the mother of Jesus, on December 8th.

"This uniquely Lyonnaise tradition dictates that every house place candles along the outsides of all the windows to produce a spectacular effect throughout the streets. The festival, which includes other activities based on light, usually lasts 4 days, with the peak of activity occurring on the 8th," according to Wikipedia.
6.2
Score
Popularity
Activity
Freshness
Jeremy Gutsche Keynote Speaker