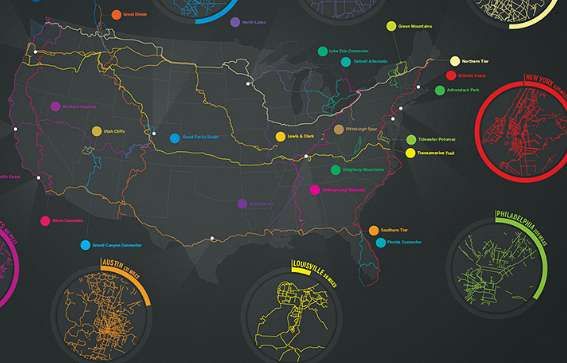 ‘The United Bike Lanes of America’ Infographic is Super

Vivian Lau — June 21, 2012 — Eco
References: awesome.good.is
Share on Facebook Share on Twitter Share on LinkedIn Share on Pinterest
This ‘United Bike Lanes of America’ infographic maps out possible transnational routes for the passionate fundraiser. Since the Terry Fox cross Canada run is still celebrated today for his determination and inspires many to complete similar fundraising campaigns, this diagram is a helpful resource.

For the seasoned bike rider, these route may not come as any help, but to the enthusiast who is just starting out, this map will be your holy grail. It details routes by major city, including the areas of Los Angeles, Philadelphia, New York and Minneapolis, while also labelling established routes that span across states. The length of each route is specified and color-coded so it is easily searchable on the map.

Hopefully resources like this will show off the plethora of bike lanes offered so as to encourage more physical activity amongst the population.