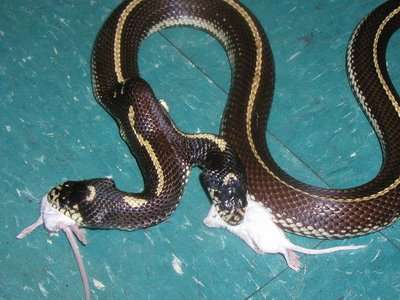 Snake fans would have loved watching an auction, taped online, that The World Aquarium held to sell ‘We,’ a six year-old, two-headed albino black rat snake.

Wrong, wrong, wrong. Calling them cutesy ironic names such as Thelma and Louise really does not make them any nicer. The beasts in the gallery were found in the United States, Argentina, Honduras, Sri Lanka, and Spain. Phew. Safe in the UK.

An expert at the University of Tennessee has even studied several two-headed snakes and found the two ‘snakes’ so independent, they even fought for food, sometimes becoming so aggressive they can even try to eat each other!