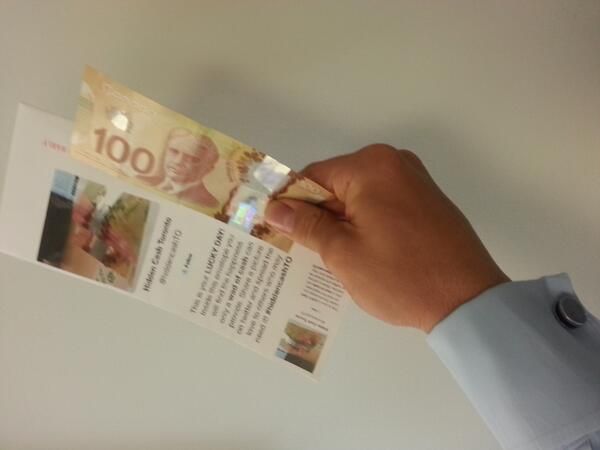 Laura McQuarrie — June 3, 2014 — Marketing
References: twitter & thestar
Inspired by the Hidden Cash Twitter scavenger hunt that started in San Francisco, hundred dollar-stuffed envelopes are popping up all over other US cities like Atlanta, D.C., New Orleans, Dallas, as well as some Canadian ones too, like Vancouver and Toronto.

'HiddenCashTO' on Twitter is the Toronto iteration of the fun cash hunt. Inspired by the original anonymous giver in San Francisco, Toronto jewellery-buyer Russell Oliver of Oliver Jewellery started his own hunt and encourages people to #PayItForward. Throughout the day, several clues are given out, hinting at where these money-filled envelopes are hidden in the city.

Hundreds of dollars have been given away so far and there may even be a $2,000 drop in the next week or two. Although many who start these social media cash hunts prefer to remain anonymous, Oliver describes that this is in the name of fun and doing good, rather than a grab for publicity.
5.8
Score
Popularity
Activity
Freshness