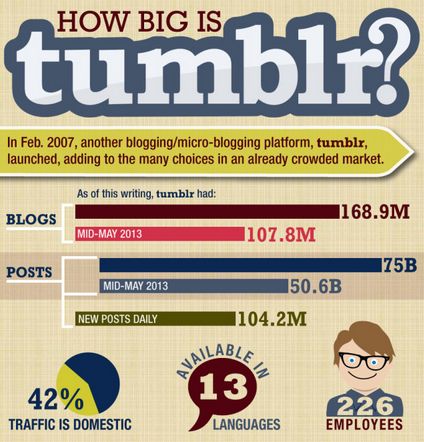 Laura McQuarrie — March 4, 2014 — Marketing
References: websitehostreview & wearesocialmedia.gr
The 'How Big is Tumblr?' infographic from Website Host Reviews examines some Tumblr statistics of the ever-expanding microblogging site. Currently, Tumblr is available in 13 different languages and there are over 168 million blogs hosted on Tumblr.

Back in May of last year, Tumblr was acquired by Yahoo! for $1.1 billion, but it seems there was a decrease in users after this time. The blogging site also seems to be an underused platform to tap into an audience of young women. Only 31 of the 100 top brands use Tumblr and seem to prefer Instagram and Pinterest over this microblogging platform.

The graphic also points out some other unsavory stats, including the site's adult content and referrals, which mostly came from adult sites as well. Although Tumblr has been cleaning up its game, it's understandable why some brands might shy away from leveraging its products or services on this platform.
4.4
Score
Popularity
Activity
Freshness

Comedian-Fragrance Mashup Blogs
The Louis C.K. One Blog Mixes the Comedian with CK One Branding
play_circle_filled