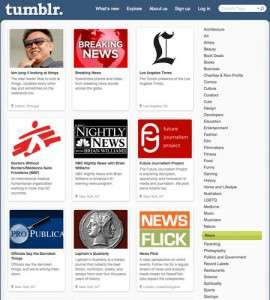 Tumblr Staff Blog Will Create Content About Tumblr Itself

The Tumblr staff blog will document the ideas, people and stories that exist within Tumblr, the social blogging platform, to create a new marketing channel based on journalism that will help to promote Tumblr's services. According to the New York Times, the staff blog will allow Tumblr to "tap into all of the free content that users upload to social networking Web sites."

So far, Tumblr has hired Chris Mohney, the senior vice president of BlackBook Media, to be the Tumblr staff blog's editor-in-chief, and Jessica Bennett, the senior writer and editor at Newsweek and The Daily Beast, to be its executive editor.
1
Score
Popularity
Activity
Freshness
View Innovation Webinars