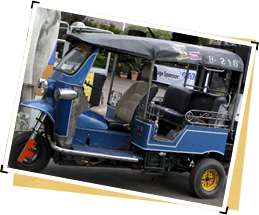 Sarah Moore — March 24, 2012 — Eco
References: huffingtonpost & denverzoo.org
It may not be the freshest smelling fuel source, but using animal waste and human garbage to power the Denver Zoo's Tuk Tuk 'Gasifier' prototype could be a major shift toward more eco-friendly power.

The Zoo's 'gasification' technology is patent-pending, and relies on waste to create a clean and efficient energy source.

The motorized rickshaw, believed to be the first one using this kind of technology, will be stopping at several zoos along its travels to the Palm Desert Association of Zoos and Aquariums. Eventually, the same technology that is used to power the motorized poo-machine will also be the primary source for a new exhibit at the zoo.

The Tuk Tuk 'Gasifier' is the first in what could be a long line of inventions powered by the unpleasantly aromatic fuel source.