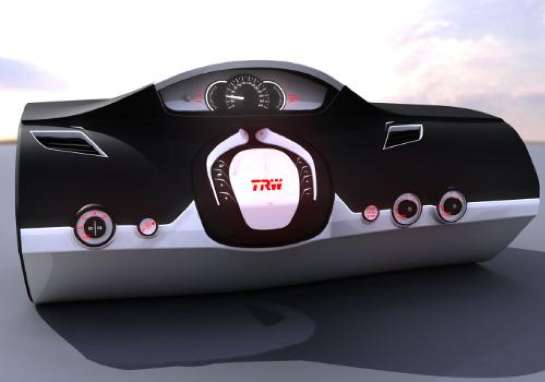 The TRW Folding Steering Wheel is a clever notion currently being developed by Michigan's TWR Automotive. In appreciating the advantages of smaller vehicles, they are attempting to remedy the state of cramped uncomfortable interiors by providing drivers with optimal space, and no expense to hi-tech and safety features of coups and compacts.

With the elderly in mind especially, the company's development manager, Manuel Poyant, believes that a retractable steering wheel that takes the form of withdrawing handlebars will more easily allow drivers increased accessibility when getting in and out of the automobile. The TRW Folding Steering Wheel will automatically draw itself into the dashboard when ever the engine is off.
2.2
Score
Popularity
Activity
Freshness
Get Trend Hunter Dashboard

Car Fashion
The 'Carsage' For Your Wheels
play_circle_filled

Classic Diner Time-Tellers
With a Thermometer and Hydrometer, the Dashboard Retro Clock Multitasks