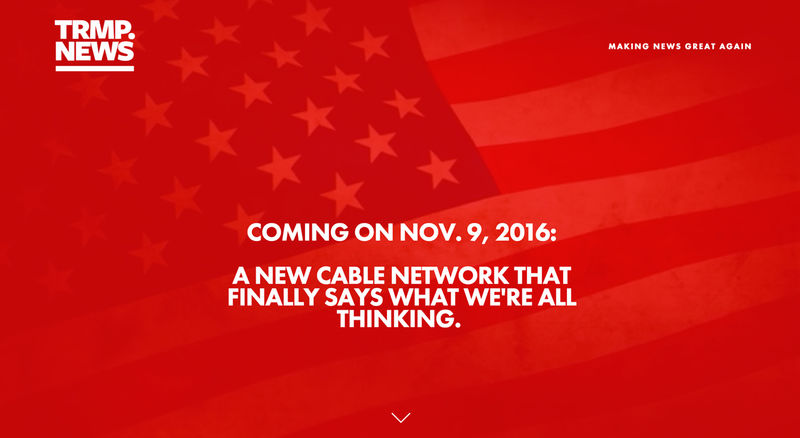 TRMP.NEWS is an Imaginary Site for Donald Trump's Media Outlet

Joey Haar — October 24, 2016 — Pop Culture
References: trmp.news & fastcodesign
Share on Facebook Share on Twitter Share on LinkedIn Share on Pinterest
According to many political pollsters and pundits, the Donald Trump 2016 presidential campaign is beginning to sacrifice its edge, and TRMP.NEWS is an imaginary look at what the controversial candidate might do if he ends up losing the upcoming US presidential election. The site is a theoretical design for what many see as a inevitability: that Trump will use his popularity to open an alt-right news outlet after the election.

The current, imaginary TRMP.NEWS site is small, with only a few header pages and no actual news stories. Nonetheless, the general aesthetic seems more or less in line with how one might imagine Trump's website to look, with bold fonts, stark red coloring and graphic allusions to both the man himself and the American flag.

The site is actually critical of Trump, having been designed by Matthew Ipcar, a former Obama campaign designer.
2
Score
Popularity
Activity
Freshness
Get the 2021 Trend Report FREE