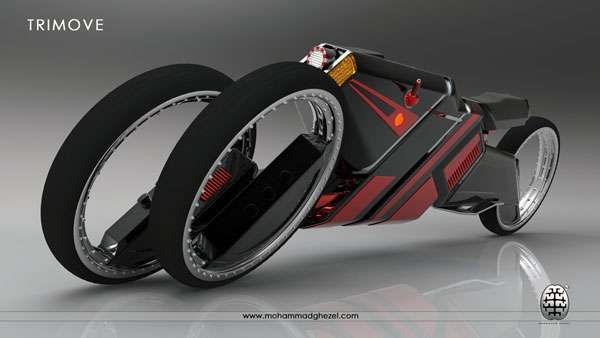 For starters, the TriMove leans into curves just like a motorcycle would. Ghezel has also designed this bike with safety in mind. Each wheel features a disk brake, which means your stopping distance is greatly reduced. This should be great news for speed demons who often find themselves burning more rubber in an attempt to stop rather than start.

The bike's control panel is mounted in a built-in console and the handles are inconspicuously mounted along the front side. The TriMove from Mohammad Ghezel more than likely won't hit the streets for a few years, if it ever does. Still, it is always nice to see what designers have in mind for the future, especially the future of the tricycle motorcycle.
4.5
Score
Popularity
Activity
Freshness
View Innovation Webinars

Badass Biodiesel Bikes
The Metalback Motorcycle is a Sweet Concept