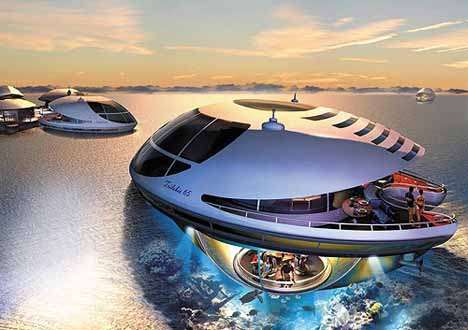 Similar to the Jelly-Fish 45 Habitat, the floating luxury homes deigned by Giancarlo Zema are semi-submerged. Each pod is meant to house up to six people living at sea while being as environmentally friendly as possible, to the land, air and water around it. When it moves from concept to reality, it will likely be made in Vancouver, British Columbia.

"It is ideal for living in bays, atolls and maritime parks," the site says. "The main aim of the project is to allow anyone to live in a unique environment through a self sufficient, non-polluting dwelling cell in unison with their ocean surroundings."

At its longest, it measure 20 metres, and its widest portion is 13m across. Its maximum speed is 7 knots, the ship deriving its power from ballard fuel cells, solar, wind and diesel.

The floor designated for sleeping will have wraparound windows surrounding two single bedrooms and two double, each with its own bathroom and windows 3 feet below the water's surface.

It's part of a houseboat community concept, or floating village, which involves a pronged dock or private marina that allows for the connection of five of these liveable water pods.