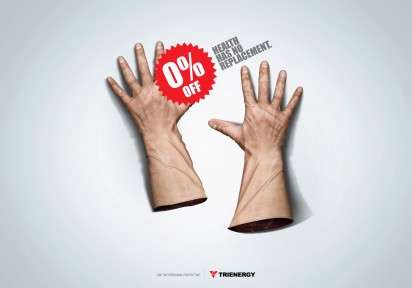 The TriEnergy 'Health Has No Replacement' Campaign is Disturbing

Meghan Young — February 26, 2013 — Marketing
References: ibelieveinadv
Share on Facebook Share on Twitter Share on LinkedIn Share on Pinterest
The TriEnergy 'Health Has No Replacement' ad campaign shows just how irreplaceable some things are. Substituting real hands with a pair of life-like gloves and natural sight with eyeball glasses allows for some downright disturbing imagery. Nevertheless, it is this disturbing element that will grab people's attention immediately, which is especially necessary when sending such an important message.

Conceived and executed by Genoma, an ad agency based in Bucaramanga, Colombia, the TriEnergy 'Health Has No Replacement' ad campaign was art directed by Miguel Chacón with creative direction by Jóse Murillo and copy by Mauricio Castro. The images used are rather simple, which allows people to fully focus on the details of the 'foot-boot,' for instance, as well as the lack of a discount despite the common red burst graphic present above each accessory.
5.2
Score
Popularity
Activity
Freshness
Jeremy Gutsche Keynote Speaker