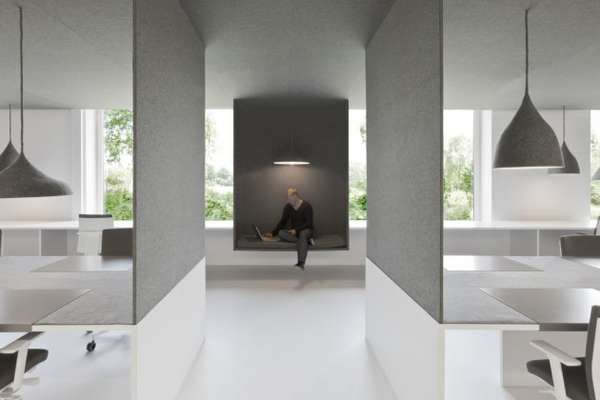 The Tribal DDB Office is Covered in Soft, Gray Felt

Meghan Young — August 28, 2011 — Art & Design
References: i29.nl & contemporist
Share on Facebook Share on Twitter Share on LinkedIn Share on Pinterest
Forget about a flurry of colors, shapes and other distracting decor; sometimes all a creative studio needs is a blank slate like that present in the interior design of the Tribal DDB Office to stimulate ideas and imagination. It is on these clean surfaces that people can project their thoughts and concepts on, influenced by nothing but their own creativity. In a sense, the Tribal DDB Office becomes a sanctuary for those needing to escape into their own minds.

Designed by i29 Interior Architects, the Tribal DDB Office is located in Amsterdam. Focusing on flexible desks and open spaces, the Tribal DDB Office supports interaction while "maintaining a work environment that stimulates long office hours and concentrated work," as put by the designers. Interestingly enough, what looks like concrete walls and lampshades is actually soft, gray felt, which was used to absorb sound for privacy as much as for its playful aesthetic.
6.2
Score
Popularity
Activity
Freshness
Get Better and Faster