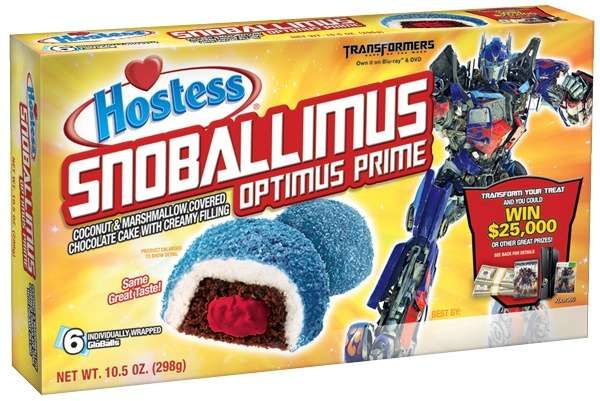 Susan Keefe — September 20, 2011 — Lifestyle
References: hostesscakes & foodista
Share on Facebook Share on Twitter Share on LinkedIn Share on Pinterest
In anticipation of the upcoming movie, America's favorite snack cake company has released a line of Transformers Hostess treats. You probably never thought it would be possible, but next to the Transformers-inspired Snoballimus and Chocwave a hostess Twinkie looks as natural as fruit bowl. When corporate America goes to the movies strange things happen. A lot of artificial colors are consumed and ill-conceived hybrid names are coined.

In addition to creating a limited run of supped up Hostess treats, the company is also running a contest for $25,000 jackpot. Sure, some may consider this a shameless publicity stunt, but all you adults out there who used to wake up early on Saturdays to watch the show in your PJs, I'm sure you're just as curious as I am. Plus, the name Snoballimus is just too hilarious to pass up. So, open wide and have a taste of these Transformers Hostess treats.
2.3
Score
Popularity
Activity
Freshness
View Innovation Webinars