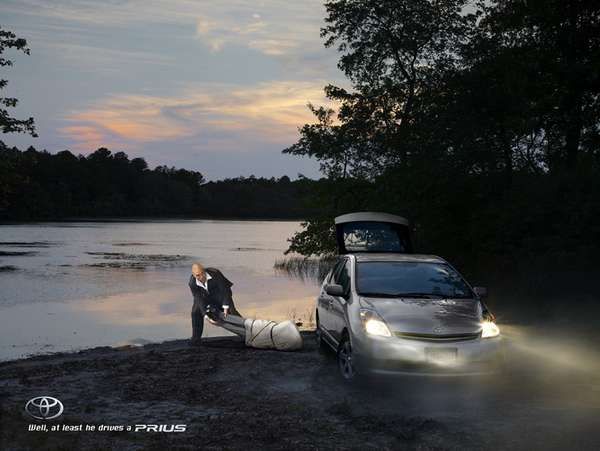 This new Toyota Prius campaign uses a backdrop of three pretty immoral acts with the tagline, â€œWell, at least he drives a Prius.â€

'Killer' shows a man dragging a dead body into the lake. 'Lover' shows a wife making out with the gardener while the husband is at the doorsteps (How very Desperate Housewives). And 'Prostitute' shows a man in a Prius chatting up a street hooker.

These ads aren't actually official, they were created by art director David Krulik (Bed & Breakfast Advertising Agency) as an unsolicited project during his spare time to enhance his portfolio and gain word of mouth.

The ads were photographed by Luke Stettner.

I think Krulik did a great job in producing ads that are more exciting than most official Toyota campaigns. He surely deserves the attention.

I wouldn't forgive a man killing me or doing my wife unless he has a Lamborghini. That's how I roll.
6.9
Score
Popularity
Activity
Freshness
View Innovation Webinars