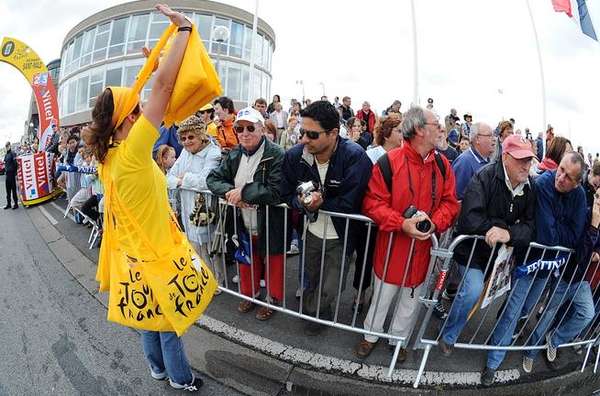 When the cyclists passed through the western France city of Saint-Malo, promoters tried to sell the canary yellow bags to fans. Judging by the photo, spectators seemed disinterested in the merchandise and fixated on the racing track. When the cyclists aren't present, however, shopping could become therapy to deal with boredom.

Marketing continues on the web with sales of items like the featured Lance Armstrong poster which reads, "Pain is temporary. It may last a minute, or an hour, or a day, or a year, but eventually it will subside and something else will take its place. If I quit, however, it lasts forever."

There are also other Armstrong items like the Lance Armstrong 7X Champion Commemorative Framed Photographs selling for $225.

Key merchandise sales are likely derived from clothes, however, and include some of the items in the gallery.

Let's not forget that each Le Tour de France kicks off with the 20 km long procession of the "Publicity Caravan" which pits 43 brands against each other, battling it out for attention by decorating 200 floats, entertaining fans and giving out about 15 million gifts.

Here are some more articles on the Tour de France: