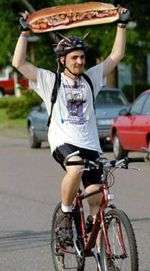 Nosh On Your Bike at the Tour de Blintz

Ben Preiss — August 16, 2007 — Lifestyle
References: thetyee
Share on Facebook Share on Twitter Share on LinkedIn Share on Pinterest
If you happen to live in Vancouver, Canada you can take part in a cycling event that, while not matching the Tour De France in physical endurance, will test your gastronomical fortitude. The leisurely 15-kilometre pedal is interrupted by pit stops at Jewish eateries. Leave the steroids at home; don't forget the Alka-Seltzer.

"The tour, which runs Sundays until Aug. 26, has left them just enough room for a lunch of kosher hot dogs and potato salad, and they're already discussing what kind of food should be on the next itinerary. Italian? Indian?

But they're getting ahead of themselves. It's not surprising that in a city known for fitness and foodies, a buffet on wheels would be a hit, but this is the first event in organizer Greg Robinson's three-Sunday sampling of Jewish cuisine, and he considers it an experiment.
He put the Tour de Blintz together as a reflection of his deeply held belief that cycling and eating should always be done in tandem.
The program includes Sabra Kosher Bakery, Shawarma Plus, Solly's Bagelry, Garden City Bakery, Kaplan's Star Deli, Mount Royal Bagel Factory, Nava Creative Kosher Cuisine, Pini's Kosher Pizza, Pretty Hot and Tasty (PHAT), and Omnitsky."

Implications - Foodie culture has blossomed overnight into a pop cultural movement that acknowledges eating as a pleasurable practice instead of a simple method of getting nutrients.
0.8
Score
Popularity
Activity
Freshness
Get Better and Faster