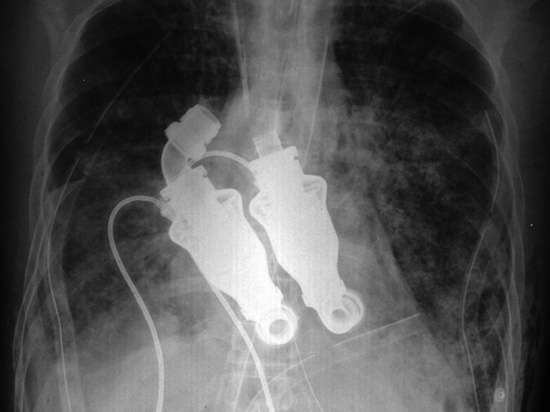 Katie Cordrey — June 20, 2011 — Unique
References: texasheartinstitute.org & npr.org
Share on Facebook Share on Twitter Share on LinkedIn Share on Pinterest
A total artificial heart was successfully implanted in a fatally ill 55-year-old patient in Texas. The device produced a continuous flow, was implanted in the space that the patient’s natural heart once filled and kept him alive an extra 12 days. The milestone achievement is a marker in medical history.

The total artificial heart is made of two turbinelike blood pumps that replace a patient’s removed heart and provide blood flow, but no heartbeat or EKG rhythm. A single pump had been approved for replacing one ventricle in those suffering from terminal heart failure, but faced with a double ventricle failure, physicians Bud Frazier and Billy Cohn implanted two of the devices into 55-year-old Houstonian Craig A. Lewis in an off-label use in an effort to save Lewis’ life. At the time of the implant, Lewis had fewer than 12 hours to live. The implantation allowed Lewis to sit up and speak with family members less than a week later and might have extended his life far beyond if the disease that damaged his heart had not attacked his liver and kidneys.

Because of Lewis’ willingness to try the total artificial heart, doctors gained new knowledge that is likely to lead to more heart replacement surgeries and hope for many who would otherwise face certain death.
2.7
Score
Popularity
Activity
Freshness
Attend Future Festival