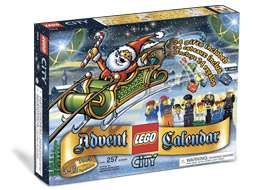 Jeremy Gutsche — October 7, 2006 — Special
References: shop.lego
Share on Facebook Share on Twitter Share on LinkedIn Share on Pinterest
After checking out the LEGO Ice Cube Tray, I can't help but notice that the LEGO kits have really cranked it up a notch. Among other things, you can now build a LEGO Enzo Ferrari, LEGO Imperial Star Destroyer, or even a LEGO remote control car. There's even a LEGO video game and LEGO advent calendar... and to think, Christmas is just around the corner.

LEGO® City Advent Calendar 2006 - Bring your LEGO® City to life with 24 exciting days of new surprises! Each day, open a new window in the specially designed Advent Calendar box to reveal a new set -- 24 in all!

LEGO Enzo Ferrari 1:10 - This authentic, detailed replica of the Enzo Ferrari in 1:10 scale is yours to build! A great addition to the collection of any LEGO fan or racing enthusiast, it captures the sleek look of the supercar of the 21st century.

Outdoor Challenger - This mean, green, remote-controlled machine is the definition of tough! With bold details, extra wide tires, massive chassis, and a top speed of 12 mph (20 km/hr), this Racer is ready for anything--water, mud, dirt, grass, you name it! Use the tip tronic speed shift to change channels and tackle the toughest terrain. Build it, race it, and win!

LEGO® Star Warsâ„¢ II: The Original Trilogy Video Game - Xbox 360â„¢ - The power of the Force and the power of the Brick combine in the all-new LEGO® Star Wars IIâ„¢: The Original Trilogy video game! This exciting sequel to LEGO Star Wars: The Video Game takes the fun and endless customization of LEGO and combines it with the epic story, characters and action from the revolutionary Star Wars: Episodes IV, V and VI! From Darth Vader's pursuit of Princess Leia aboard her Blockade Runner to Luke's final confrontation with Emperor Palpatine, you can build and battle your way through your favorite film moments!