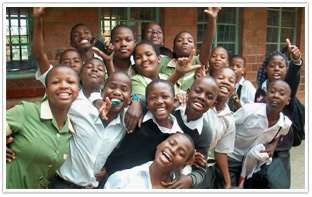 Because a lot of youth in developing countries live, do chores and play barefoot, TOMS Shoes addresses an essential factor in changing lives. As stated on its website, TOMS focuses on shoes for a number of reasons: the risk of soil-transmitted diseases; the risk of cuts and sores that can become easily infected; and because many schools require that children wear shoes to school as part of their uniform. If they can’t afford shoes, they can’t attend school.

TOMS Shoes was founded by American Blake Mycoskie who was traveling in Argentina and discovered that children he had met had no shoes. It was then, in 2006, that TOMS was created with the simple, but effective, “One for One” idea. The style of these shoes was also inspired by the Argentine alpargata design, which is very lightweight and portable. Currently, the shoes have been given to children from the Southern United States to Ethiopia, Haiti and Guatemala. In order to organize the shoe drops, there’s Friends of TOMS, which is the non-profit offshoot of TOMS Shoes.

TOMS Shoes occupies a powerful space in the social business sector because it doesn’t rely on fundraising or charity in order to support itself, but instead utilizes the money that the customers give toward a social end. Undoubtedly, Mycoskie recognizes the importance of social entrepreneurship. “I’ve always said that with a charity, what happens when you have a time like right now, (when) economic times are tough and the donors maybe aren’t there, the charity really suffers. But the nice thing about TOMS is it being a for-profit business, we’re continuing to sell shoes so we can continue to give shoes,” Mycoskie said in a 2009 interview with CNN.

With collaborations with Ralph Lauren and Element Skateboards, TOMS has attracted both its ethos and its brand to the mainstream. It is in part thanks to the mainstream recognition of this company that TOMS Shoes, as of September 2010, has given more than one million pairs of brand new shoes to youth in developing countries around the world.

Social Entrepreneur Associations
‘Ashoka: Innovators for the Public' is World-Changing