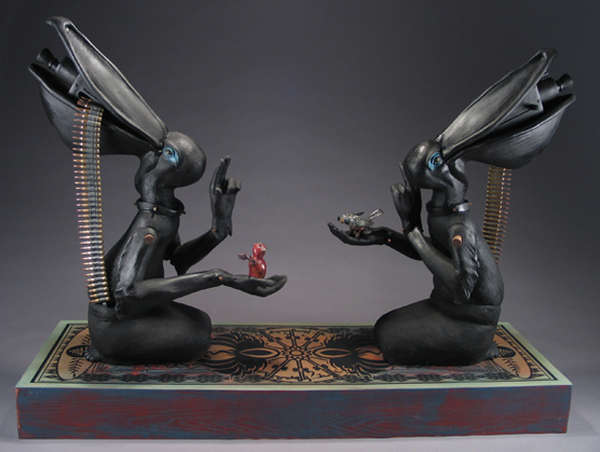 The Work of Tomas Schneider is Inspired by His Dreams

Meghan Young — August 14, 2013 — Naughty
References: schneiderworks & psfk
Share on Facebook Share on Twitter Share on LinkedIn Share on Pinterest
There is a reason why the work of Tomas Schneider is slightly disturbing. Although inspired by animals, his sculptures are unlike anything living on Earth. They may seem familiar at first, but almost immediately people will be unnerved by their strange appearance. For instance, a panda has been given a robotic makeover while a pair of rabbits have been outfitted with guns for ears. That is because Tomas Schneider is inspired by the stuff of dreams.

Based in Austin, Texas, Tomas Schneider certainly taps into a lot of imagination when it comes to his works of art. He writes, "There exists a tiny space between the conscious realm and subconscious sleep, the wake of life, or the slipstream of consciousness. This often overlooked and briefly occupied slipstream is a very powerful space--a space where time loses its grip and mythologies are born."
3
Score
Popularity
Activity
Freshness
View Innovation Webinars