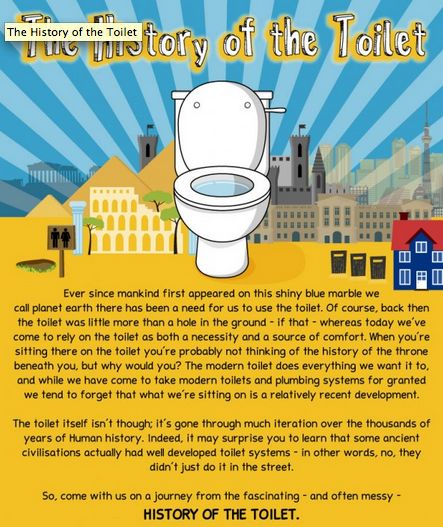 The Toilet History Infographic Details the History of This Life Staple

Akihiko Tse — September 28, 2013 — Lifestyle
References: visual.ly & designtaxi
Share on Facebook Share on Twitter Share on LinkedIn Share on Pinterest
Contrary to popular belief, Thomas Crapper was not the person responsible for the modern flushing toilet, according to a toilet history infographic. In fact, Crapper was hired by King Edward VII to install toilets across several royal palaces. While on his journey, he had the opportunity to patent some bathroom-related inventions and was the first person to display them in a showroom, which eventually led to his heightened profile.

According to the toilet history infographic, titled 'The History of the Toilet,' the white throne we all sit on has its roots to as far back to Scotland in 3,000 B.C. While there are other "contenders" for who invented the toilet, among them the Greeks, ancient Egyptians and Romans, the toilet system didn't dramatically improve until around the 16th century. By the 20th century, the modern toilets more familiar to us -- with the water tank perched above or behind us -- appeared. Such has been the evolution of toilets than we now have toilets that detect, wash and dry our backsides when it feels its presence looming.
2.1
Score
Popularity
Activity
Freshness
View Innovation Webinars