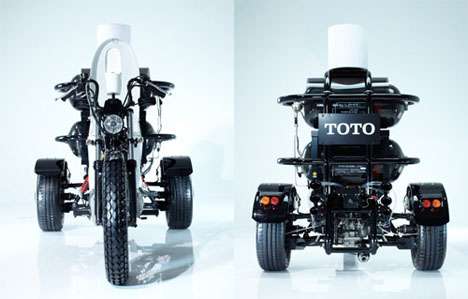 No, this certainly isn't a joke, nor has April Fools arrived early: The Toilet Bike Neo is fuelled exclusively by the driver's faecal matter -- the engine is equipped to extract biogas from the stool, process it and use the energy to operate the motorcycle. But that extraordinary feat isn't the only trick that the designers at TOTO included! The biogas bike also uses residual light produced by special bulbs in order to leave mid-air messages that quickly fade (pictured above). Moreover, the Toilet Bike Neo is equipped with speakers, allowing the driver to not only entertain spectators with music, but talk to the electric bike. That's right, it talks!

The ingenuousness of Japanese engineers never fails to astound. However, one unanswered question remains: Does the driver defecate in public while on the road, or is their a way to clandestinely poo?
6.2
Score
Popularity
Activity
Freshness
Get the 2021 Trend Report FREE

Caged-In Motorbikes
The Hyundai Concept Motorcycle is Inspired by Musculature