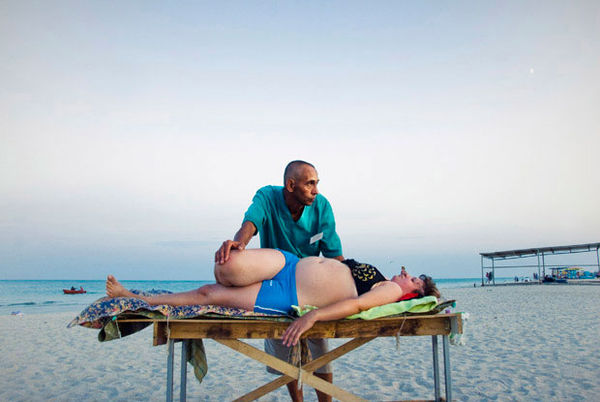 Rahul Kalvapalle — May 17, 2014 — Art & Design
References: youok.ru & featureshoot
Toilers by the Sea is a photo series that depicts people involved in different kinds of money-making activities on a Ukrainian beach. The series is the work of Russian-Ukrainian photographer Oksana Yushko.

As a child, Yushko once spent a summer at the Fedotov Spit in Ukraine. She decided to return to the popular holiday spot to capture the people who work there providing different kinds of services for vacationers.

The 'toilers by the sea' sell fruits, dry fish and beverages and provide different kinds of services ranging from massages to entertainment. Many of them are locals who come from the small villages around the spit, while others come from nearby Ukrainian cities.

Perhaps the most interesting character captured in this series is a doctor who has his own practice in a nearby Ukrainian city, but gives massages by the sea in the summer.