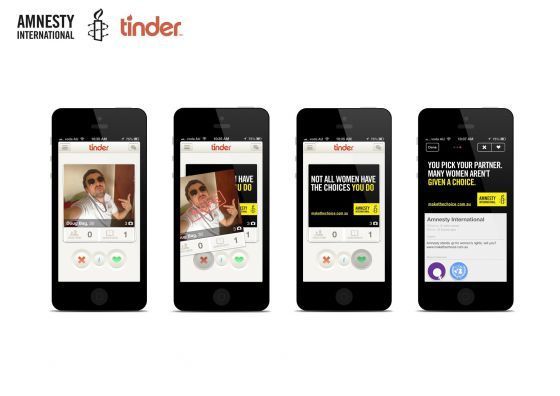 Laura McQuarrie — March 9, 2014 — Social Good
References: makethechoice.au & creativecriminals
Share on Facebook Share on Twitter Share on LinkedIn Share on Pinterest
In celebration of International Women’s Day on March 8th this year, Amnesty International staged a campaign on the Tinder dating app. Although the app is becoming a more popular place for marketing stunts, it’s still quite unexpected to come across a message like the one Amnesty International promoted, instead of a match.

On Women’s Day, Tinder spread the message that “not all women have the choices you do,” cleverly reiterating its stance for women’s rights and equality all over the world.

One of the pros of online dating, such as on Tinder, is that it empowers people to seek their own matches. The Tinder message is hard-hitting and definitely one that most women probably don’t expect to see while swiping either to the left or to the right. Hopefully it will cause some women to stop and think about some of the choices that they might take for granted on a daily basis.
4.7
Score
Popularity
Activity
Freshness
View Innovation Webinars