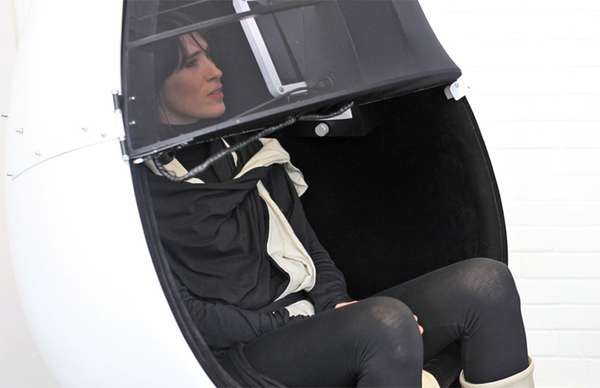 The Listening Chair Was Designed for Imogen Heap

Katherinev123 — June 30, 2012 — Art & Design
References: waldemeyer & psfk
Share on Facebook Share on Twitter Share on LinkedIn Share on Pinterest
Designer and engineer Moritz Waldemeyer has created this innovative egg-shaped recording studio pod called the 'Listening Chair.' It was designed for Imogen Heap, who asked the designer to collaborate with her on a portable, mini-recording studio that can travel the globe to find answers for her question, "What is the song that still needs to be written?"

Complete with volume-controlled speakers, LED strips, a camera and a microphone, the Listening Chair functions like an escape pod, where people can go to think and ponder their favorite song, as well as record a message for Imogen Heap. Subsequently, the user can decide whether she wants her song to be sent as a personal message only or to have it possibly be used in the video that will accompany the song Imogen Heap creates from the process. According to the designer's site, all of the recordings will be combined in a documentary that Heap will use as inspiration for a new capella track.
2.2
Score
Popularity
Activity
Freshness
Jeremy Gutsche Keynote Speaker