The Latest in Japanese Toys From Kid Robot 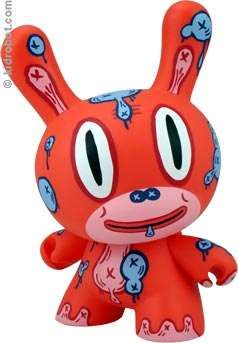 M.O.D. Dunny (Red Picture)M.O.D Dunny in Red *8-inch* The Dunny Show brought forth some of most creative designs to ever hit the Dunny canvas. We are proud to bring you Gary Baseman's brain-laden M.O.D. Dunny from that very event. This release marks the first Dunny Show piece to be transformed into an 8-inch figure. If you didn't get your hands on the one-of-a-kind original, you need to get your hands on this!

Don't mess with Don'yoku (Other Picture)
In a time long lost there lived a successful merchant by the name of Don'yoku. Successful being an understatement and the term merchant used very loosely. He was rumored to be one of the country's highest ranking Yakuza. The proprietor of several acclaimed Geisha houses, it was said that Don'yoku's real trade was his ability to balance his dealings with both the Yakuza and the country's politicians, using each to keep the other in check.
During his long reign the few that dared cross him were quick to learn the error of their ways. The next morning they would wake to find their entire household had been slaughtered while they had slept. Servants and family alike, no one was spared except the individual that had crossed Don'yoku. The only evidence that was left behind was a shuriken with the number Ni (2) engraved upon it. Some believed that the Ni represented the second chance the individual had been given. Others believed that it was a marker left by the infamous Nimaime ninja clan. Although no one dared finger Don'yoku for these horrendous retributions, the 'massacre while you sleep' eventually became known as â€œThe Don'niâ€.
After a long life of success Don'yoku retired to lead a humble life in the country. How humble is left to speculation, for many of the land's highest ranking Yakuza, politicians, and Geisha were often seen traveling the lonely road to his small estate on lake Kuroi Kiri. (Kidrobot)
6
Score
Popularity
Activity
Freshness
View Innovation Webinars